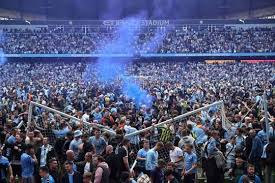 Premier League clubs agreed to launch automatic bans alongside the English Football League in July in a bid to address fan behaviour issues.

They have now decided on a minimum one-year term at a meeting of Premier League shareholders.

The bans will take effect immediately and apply to both home and away games.

Football is coming together to bring in strong measures to tackle antisocial and criminal behaviour: https://t.co/FbftQnEt8x#LoveFootball #ProtectTheGame pic.twitter.com/a4tzmvxT7i

“Clubs unanimously agreed to introduce minimum-length bans for supporters who take part in anti-social and criminal behaviours at league stadiums,” read a statement from the Premier League following today’s meeting.

“These bans could also be extended to accompanying parents or guardians of children who take part in such activities.”