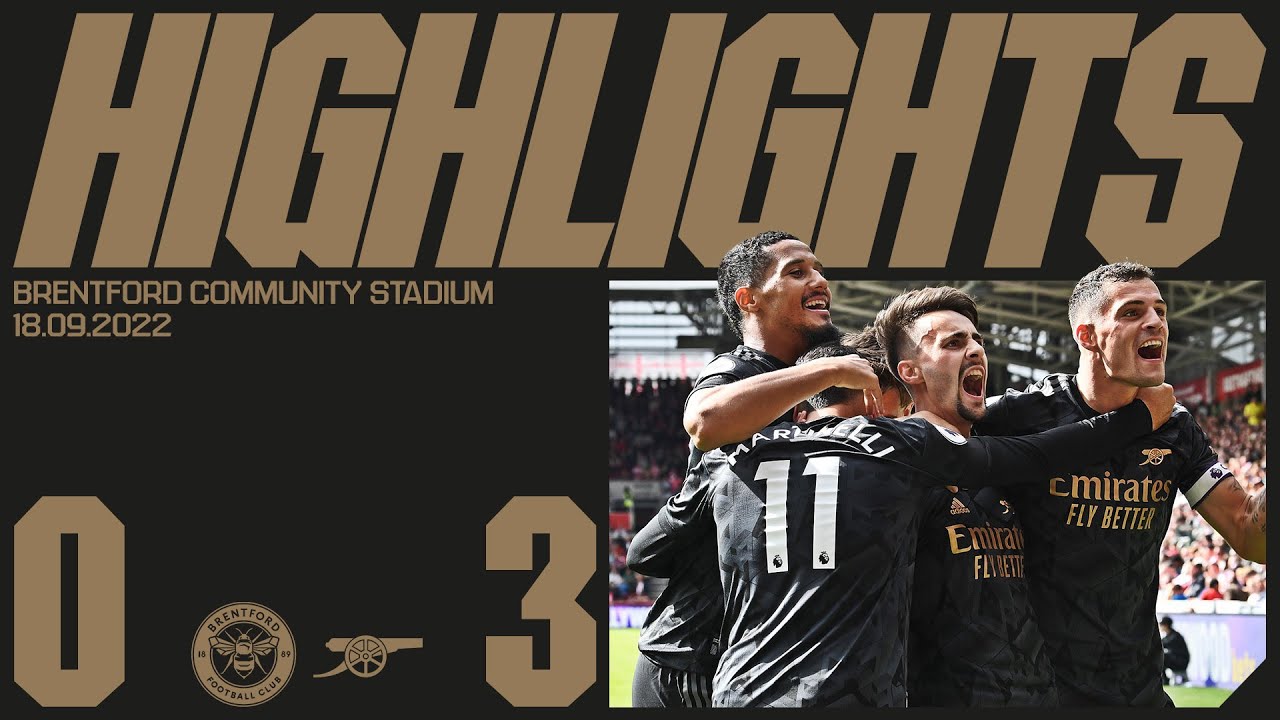 INSIDE HALE END | Episode 5 | On The Road

An excellent attacking display resulted in a well-deserved victory away to Brentford.

We were the better side from the moment William Saliba headed us into the lead after 17 minutes, and the winning margin could have been even greater.

Gabriel Jesus added a second with a well-taken header before Fabio Vieira – on his first start in the Premier League – crashed home a third in the second half.

Ethan Nwaneri came on as a late substitute to make history as our youngest ever player – aged just 15 – as we went back to the top of the league in fine style.

After a minute’s silence, and rousing rendition of God Save the King, we got underway and had an excellent chance within two minutes. After a flowing move, the ball was worked towards Granit Xhaka in plenty of space inside the area. He picked out Gabriel Martinelli in a central position, but the Brazilian lost his footing at the vital moment, and his shot trickled through to David Raya in the Brentford goal.

After our bright start, we took the lead from our first corner of the game. Bukayo Saka swung the ball in, Saliba got across his marker and glanced a header across in the keeper and in off the post for his second of the season.

Raya tried to claw the ball away, but goal-line technology ruled it had gone in.

We soon increased the lead with another header. Again we built up the play really well, before Xhaka floated in a wonderful deep cross to the far post, where Jesus rose majestically to plant his header firmly back into the opposite top corner.

Saka flashed a shot over when he broke into the penalty area just moments later as we threatened to take complete control.

Brentford reminded us of their danger, especially from set-pieces, and put us under pressure with two or three successive long throws and corners, but our defence dealt well with the aerial assault.

We continued in the same vein at the start of the second half, and Jesus had a shot blocked after wriggling free inside the box.

We didn’t have to wait long to increase the lead though. Bukayo Saka rolled the ball to Vieira, five yards outside the box. The Portuguese midfielder was afforded too much time by the home defence, so he shifted the ball onto his left foot, then arrowed his shot home off the post.

It was a superb way for the 22 year old to announce his arrival on his first Premier League start.

Mikel Arteta’s men kept the pace high in search of further goals, and dominated possession. The closest the hosts came was from a free-kick just outside the area. Ivan Toney flicked the ball up and looped a volley just over the cross bar.

Meanwhile, Raya made a good stop low down to prevent what would have been an excellent team goal, with the impressive Xhaka setting up Jesus in the box.

Raya then made a wonderful flying save to deny Saka when the England man’s curling shot was destined for the net.

As time ran out, Eddie Nketiah came on for his 100th Arsenal appearance, to join Jesus up front.

But it was another Hale End graduate coming on that made Arsenal – and Premier League – history. Nwaneri – aged just 15 and 181 days – came on to become our youngest ever player, breaking Cesc Fabregas’s record by nearly than a year.

He’s also now the first ever 15 year old to play in the Premier League, and he will always remember this historic – albeit brief – debut for the final few minutes at the Brentford Community Stadium.

And he can say he played his part in a victory that took us back to the top of the table. That’s six wins from our opening seven games, heading into the international break before an intense-looking October, featuring nine matches.

This is the Official YouTube channel for Arsenal Football Club.

For more match action, highlights and training videos, make sure you become a digital member and sign up to Arsenal Player. It’s FREE and is the Home of the Game: https://arsn.al/arsenalplayer

INSIDE HALE END | Episode 5 | On The Road