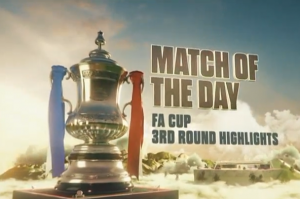 BBC Match of the Day MOTD: The FA Cup

Action from the third-round ties, including Chelsea v Chesterfield at Stamford Bridge and Leicester City v Watford at King Power Stadium. Chelsea’s bid to go one better than last season got under way with a match against National League opposition, while the Foxes began their defence of the trophy by welcoming Watford boss Claudio Ranieri, who won the Premier League with Leicester.